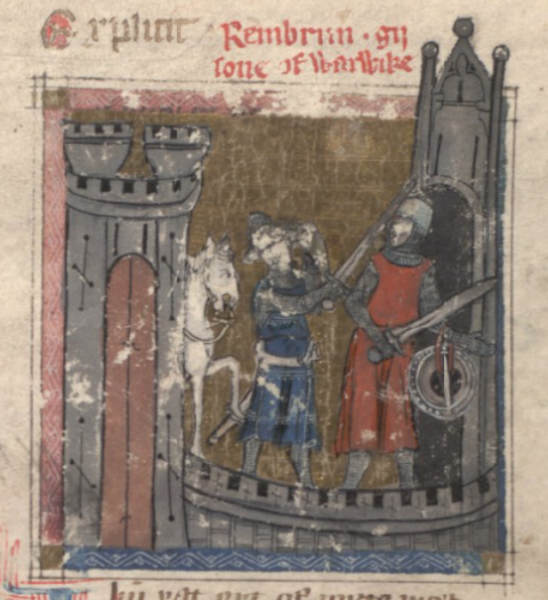 French Lexis in the Auchinleck Manuscript: A Digital-Philological Approach

The Auchinleck Manuscript was made in London in the 1330s; in its now damaged state it contains 44 Middle English texts. Literary historians have typically focused on the proto-nationalist concerns of several of its texts, which feature well-known English heroes, and some have sought to draw a link between these concerns and the language chosen for the book’s texts. Thorlac Turville-Petre, for example, has famously described the Auchinleck Manuscript as a “handbook of the nation” in which English nationalism and the use of English are deliberately intertwined.

This project seeks to problematise the yoking of language and nation that has become commonplace in readings of the Auchinleck Manuscript. Specifically, it considers the French lexis deployed in the manuscript’s texts and the relative novelty of its appearance in Middle English contexts.

Our main aim is to match the 17,000+ lexical items in the Auchinleck Manuscript with headwords in the Middle English Dictionary in order to extract and sort information pertaining to the etymology of the manuscript’s words and their first dates of citation in Middle English. If a significant proportion of the Auchinleck Manuscript’s lexicon can be shown to be made of recent French imports, to what degree can the manuscript be said to be “in English”?

We hope through our study of the Auchinleck Manuscript’s English to contribute to a more nuanced account of the links between France and England at the onset of the Hundred Years War (1337-1453).

Update: the results of this project were written up in an article that has appeared in Digital Scholarship in the Humanities. See here for the text.

CFP : Workshop on Research and Education in Urban History in the Age of Digital Libraries

Register for the next Montreux Jazz Memories Hackathon!

Fighting for gender equality in the digital world

Interdisciplinary CROSS program invites proposals on the theme of ‘crisis’

Workshop in Sion: Social and political issues of the digital transition