Ariane Jambé is currently carrying out a research project on a Byzantine manuscript of the Iliad (13th century), the Genavensis græcus 44, deposited in the Library of Geneva and available on e-codices platform. The Genavensis græcus 44 is an important manuscript in the history of the establishment of the Homeric epic. It contains the 24 Books of the Iliad and, for the first twelve Books, a yet unpublished interlinear paraphrase.

Taking advantage of the digitisation of the manuscript, the SNSF project “The digital future of a funding text: the Iliad and the Genavensis Græcus 44 manuscript” (2017-2020), directed by Prof. David Bouvier, has enabled Ariane Jambé to become familiar with the philological challenges of mirroring a source text (Iliad) and a target text (paraphrase): the confrontation of the Iliad and its paraphrase shows that rephrasing is not only a clumsy translation of the epic, but also an interpretation. Within the framework of this project, these challenges were fuelled by the technological and computer issues raised by textual tagging, the algorithmic alignment of two texts, morphosyntactic comparison or lemmatization. She has thus contributed to the development of the Iliadoscope, a platform that allows renewed modes of reading this manuscript and provides the user with computer tools purposely developed. Although the project is over, Ariane Jambé continues her research and takes a close interest in the OCR techniques developed through deep learning and applied to Greek manuscripts.

Ariane Jambé sees in the new technologies a possibility for classical philology to highlight ancient manuscripts, to show the plasticity of ancient texts and, finally, to continue the transmission—in a digital form—of the Ancient Greek literature.

Since 2019, she has been more directly committed to these issues and co-founded, together with Dylan Bovet and Dr. Patrick M. Michel, #ASAnumerica, a group engaged in critical thinking for applications and uses of digital technologies in Classics at UNIL. #ASAnumerica aims at supporting emerging digital projects between researchers in Classics and beyond, at promoting networking and developing a critical and humanistic thinking for new technologies, and what they imply, from the viewpoint of this specific academic domain. 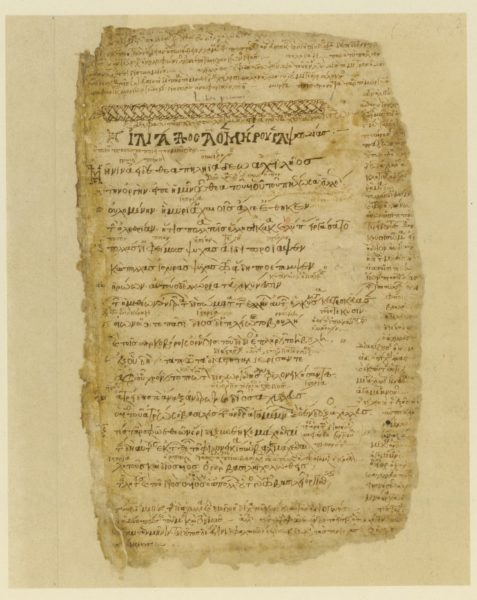