Sociologist and former EPFL researcher Dominique Boullier has published a new book on social media and society, which proposes ways to manage the global wave of what he calls “media warming”: the viral spread of content over social networks which, he argues, are increasingly taking over our attention and lives.

Boullier’s book, Comment sortir l’emprise des réseaux sociaux (How to Escape the Grasp of Social Networks) was published this month by Le Passeur press. In it, he proposes several solutions to this media warming, or “réchauffement médiatique”; notably, the control of the rapid spread of viral content via shares and retweets, as a means to reap the utility of social media without being consumed by it.

We posed a few questions to Boullier to find out more about his new book, and about the issue of media warming and its implications for a digital society. 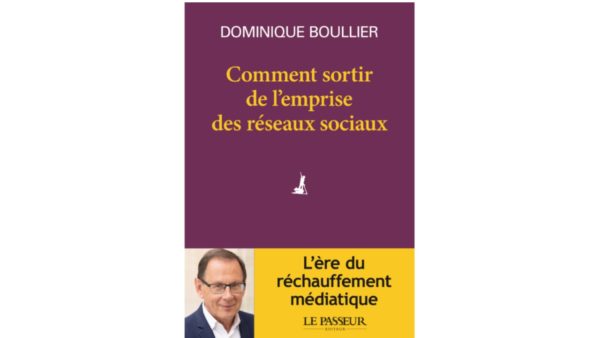 dhCenter: Can you explain why you chose a comparison to global warming to describe the increasing impact of social media on our attention and lives?

Dominique Boullier: The acceleration of the rhythm of reactivity equals a change in the mental climate, because alertness is becoming the main regime of attention. This means adrenaline and dopamine effects that are rewarding, even though they produce some kind of exhaustion in the mind.

The destruction of our mental climate is an effect of the design of a technical infrastructure that was not designed as such at the start, just as climate warming was not expected from the extractive economy and the automobile infrastructure that were built at the beginning of the 20th century. But the climate crisis we are facing now should make us aware of the importance of keeping control of a global infrastructure, and not just believing that consequences can be addressed later.

dhCenter: Can you provide one or two examples of evidence for the negative effects of social media?

DB: We must discuss the consequences of this specific model of social media, but not of social media in general. For instance, WT Social, created by Wikipedia founder Jimmy Wales, does not produce the same psychic effects of reactivity. The same for Mastodon, the open-source social media platform. Another design is possible depending on business and political motivations.

The most important effect at the individual level is a permanent state of mental alertness, where reacting as fast as possible is much-valued. This means allocating cognitive resources to this ongoing task, and eliminating the resources required for long-term tasks. Another effect is becoming familiar with shocking content, which over time requires increasing the intensity of the stimulus to reach the same level of excitement.

At the collective level, no place is left for discussion of complex and nuanced issues, since only high-frequency reactivity is required. The political democratic debate is already under suspicion because of polarization, but the mediatic system produced by the main social media platforms generates more polarization. It amplifies this trend and does not calm it down, even though this used to be the role of the media: to allow expression, speech, and debate instead of violence.

dhCenter: You argue that the replication of social media sharing must be controlled in order to control “réchauffement médiatique”. Can you give one or two examples of how this could be achieved that are discussed in your book?

DB: The main idea of this book is that the rhythm that social media platforms adopt is altering our attention, and focusing it only on high-frequency reactivity for the sake of engagement that can generate predictive products that are sold to brands for their ads.

By introducing metrics of our activity, such as number of tweets, retweets, sharing, likes, and so on, we give users the opportunity to be aware of the intensity of their reactivity, which generates noise and notifications for their whole network. Then, we can move to introducing quotas: a number of daily likes, retweets, etc. that will enforce blockage of this activity on a platform when reached.

Then, exactly as we do on roads for safety purposes, we can decide to lower the threshold down to one retweet, one post, etc., without impairing freedom of expression; only regulating the speed of propagation that destroys the cognitive ability to focus on more complex or balanced information. This design is already considered by platforms such as Twitter, because it noticed that 60% of retweets were posted without having read the content itself.

dhCenter: Why do you think that “fake news is less a problem of truth than of uncontrolled virality”?

DB: “Fake news” cannot be defined on a permanent conceptual basis, because opponents will have different definitions of it. Debate, diverse points of view, and the contradictory exchange of arguments is a great value of democracies. But the control of the quality of  news takes time. If there is a huge engine that propels the most shocking statements in the minds of a large population before this control can be done, this becomes more critical than the intrinsic veracity of the information.

If we can break the chains of contagion, then the visibility of all news will be slower to obtain, and the time necessary to debunk the fake news will be used to design immunity counterstrikes. Preventing collective intelligence from being destroyed by high-frequency reactivity will reduce the impact of fake news, as well as all other abusive alert systems.

Currently a professor at Sciences Po in Paris, Boullier previously directed the Social Media Lab at EPFL, and is a former researcher and lecturer in the Digital Humanities Institute in EPFL’s College of Humanities. The sociologist and linguist has also taught a number of courses in the field of digital humanities, and directed and created several laboratories, including the Lutin User Lab.

Among many other books, Boullier is also the author of Sociologie du numérique (Sociology of the Digital), which analyzes the uses and economic, cognitive, and socio-political aspects of digital technologies, and examines the place of the “social data sciences” within the field of digital humanities.